I may have bid 'cept I probably have the lot of 'em already....and I'm broke!
Top

Tidying up stuff I found this. I may have posted a scan of it before but I think my scanning skills have improved so I'll inflict it on you again.

I was thrilled to find the WIWC bees when visiting Coney Island in July '03. Peg Moran was equally thrilled I dragged her all the way out there to take this picture.
Top

...actually it is in swedish.

Sorry ! Anything worth translating/summarising?
Top


Stop the presses: None other than Prince, dressed like Little Lord Fauntleroy, introduced Barbra Streisand last night at her MusiCares Person of the Year dinner at the LA Convention Center. He’d been sitting quietly to the side most of the evening, although at one point he did mildly greet Elvis Costello and his wife Diana Krall, in a sea of 2500 music industry types and stars. This means Prince and Costello sat through a three hour plus evening of performances you might noe associate with their ilk- from the sublime (Leona Lewis) to the sensational (Stevie Wonder).
Top

Gary Spencer Millage, writer of the wonderful Strangehaven has just completed work on his next book, Alan Moore: Storyteller.

The book will be published in the UK in May by Ilex Press. 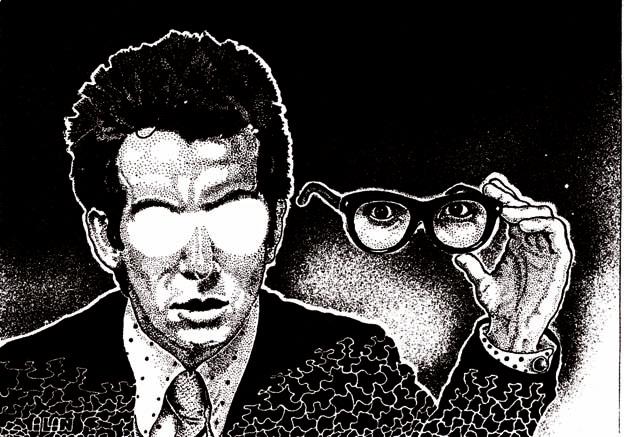 oops. Not necessary for any translations here. At least not in my eyes! Sorry for late response!
Top


It seems to state, interestingly, that the 'Session' tv show was recorded on June 1 1987 , not Oct. '87 as , seemingly, previously assumed.

The 1978 image of Elvis with punk band Suicide has surfaced-

Roy Trakin’s notes in the liner booklet is a wonderful guide, describing this support slot to Elvis Costello & the Attractions in Belguim in detail, “It was something out of The Year of Living Dangerously meets Nosferatu. Suicide had evoked a similar reaction supporting The Clash, did it matter which buttons they pressed in the audience, whether the reaction was good or bad? They begin to perform, Ghost Rider-Rocket USA-Dance…finally we arrive at Frankie Teardrop and the crowd are becoming too much. Vega tries to relate their own life to Frankie’s, looking for sympathy- they just want to do their thing. “We’re all Frankies” he points out, attempting to get the mic back “C’mon???”- the audience holler abuse, you think Pop Idols get it in the ear? Suicide admit defeat and leave the stage; but in the long-term, they won and this, one of the greatest live albums, is the proof.
Top

Following what can only be described as a tumultuous 2010, Deckchair Theatre bravely stepped up to the microphone Wednesday night and launched their performance program for 2011, entitled ‘A Season of Voyages’.

As expressed by Deckchair Theatre Board Chair Dorothy Wardale, City of Fremantle Mayor Brad Pettitt, and Deckchair Theatre CEO and Artistic Director Chris Bendall, this year’s season is largely inspired by the company’s port-side location of Fremantle, and utilises a recurring motif of water and voyages, whether they be voyages of discovery, voyages into danger or a journey into the centre of human understanding and emotion.

Deckchair’s second core show is Lorelei, an original work being developed in collaboration between Chris Bendall and Mark Storen, who’s solo cabaret show Cut to the Quick featured at Deckchair as part of the 2010 Fremantle Festival. Described as “a mystery, a romance [and] a cabaret”, it pulls upon German mythology, and the music of Tom Waits, Cole Porter, Elvis Costello and Nina Simone, to tell the story of Lorelei and Buzzard, a performing duo who are travelling the world via cruise ship. When visiting Shanghai, Lorelei goes missing, and everything unravels.

To help whet our appetites even further, attendees were then treated to a delightful rendition of Jacques Brel’s song, Amsterdam by Lorelei performer, Rhoda Lopez. With its 1930s setting, eclectic soundtrack and European locations, this production could end up having a very Agatha Christie feel to it; sumptuous and exotic, full of numerous plot twists and turns. I would be very disappointed if either Miss Marple or Hercule Poirot didn’t make an appearance.


There's no mention of Elvis on the company's site -

Published by Alfred A. Knopf, Egan's novel is an innovatively structured work about characters involved in the music industry. The title is taken from an Elvis Costello song that is also about time and how decisions echo across generations.

It is the first significant critical prize for Egan, who has published three other novels and a collection of stories. The National Book Critics Circle is a membership organization of more than 600 book critics nationwide. The prizes were announced at the Tishman Auditorium of the New School.

We need to know this -

This is typical rock-star hair behavior, according to April Barton, who tends to the tresses of Bono, Elvis Costello and Rufus Wainwright at Suite 303, her buzzy salon in Manhattan’s Chelsea Hotel. “The very purpose of rock hair is to be low maintenance,” she says. “The minute my guys leave me, they can go on tour for four months and not think about it.” Barton, who considers herself the master of the rock cut, has been doing it for 25 years. “I have a philosophy about it,” she says. “It all comes from somewhere. Look, the Stones had that great, greasy texture everyone still tries to copy because they were jamming, having sex, doing drugs and sweating for five days straight."

Tucked away on the 3rd floor of the notorious Hotel Chelsea, Suite 303 has been cutting it up for over 13 years without so much as a sign to lure outside customers. With no barber chairs and original paintings adorning the walls, walking into Suite 303 isn't like a trip to the hair salon. It's stopping by to see an old friend, giving her adorable brown Labrador mix Ava a scratch on the tummy and cranking up a CD of a her favorite new punk band. Oh, and then getting a great haircut to boot.

Suite 303 caters both to men and women. In the fashion world, Barton is perhaps best known for her signature men's haircuts.

"Strong, defined foundation," she says. "That's what I'm known for. I want my clients to be caught in a convertible and the hair's still going to translate well. Two months after I cut it, I want it holding strong." She laughs, "I'm kind of like the Viagra of hair."
Top

A photo of Elvis from 1987 popped up on Flicker recently. The photographer gave permission for its use on the E.C. wiki site and since written about it on his blog - Tom doesn't seem to have made the earlier mentioned Costello connection in the title. The book is next , by the way, in my reading bundle.

Jennifer Egan's new novel, A Visit from the Goon Squad, comes with the kind of rapturous book-jacket recommendations that tend to stir recalcitrance in me. Well, I think, the Los Angeles Times may believe it's the "smartest book you can get your hands on this summer", but just how smart is the LA Times? In fact, Egan's book turns out to be seriously good – very readable and stylistically inventive – the latter best exemplified by a chapter that is presented entirely as a set of Powerpoint slides.

These not only work surprisingly well as a vehicle for character depiction (the notional narrator is a chippy teenage girl), but also introduce a great nerd's list: her brother Lincoln's compilation of the greatest pauses in rock history. I'm hopeless at this kind of thing, but I was instantly reminded of a much-loved moment in Elvis Costello's song "Impatience" (3'.37" in), when he pulls the tempo to a near stop before releasing it back to full speed with a delirious slither of strings.

As in Egan's novel – which hides a lot in the gaps between chapters – there's a world of feeling in that moment of suspension. Lincoln's list includes "Bernadette" by the Four Tops, Hendrix's "Foxy Lady" and Bowie's "Young Americans". Suggestions for other blissful hiatuses welcome.
Top

You can read the Sky article here @ above link
Top That's a cool photo of him.
Top

Radio Radio by the Old Town School's Elvis Costello Ensemble in their first public performance on April 1, 2011 in Lincoln Square.

accidents will happen
alison
blame it on cain
blue chair
clowntime is over
clowntime is over no. 2
clubland
i can't stand up for falling down
i want you
imagination
living paradise
new amsterdam
peace love & understanding
radio radio
so like candy
veronica
Top

"Province Sports columnist Ed Willes is a man on a mission. He sits at Rogers Arena night after night, watching the Canucks score, dreaming of a time when he can truly enjoy their celebration.

You see, Willes is petitioning the Canucks' DJ Dave to embrace a new (and old) goalcelebration song. No Gary Glitter. No Blur. Willes wants Elvis Costello's "Pump It Up" to be the new goal song for the Canucks, and he's been tweeting about it like mad (twitter.com/willesonsports) "It's an absolute natural," tweets Willes. "
1. Elvis lives in Vancouver.
2. He's far cooler than whatever they're playing now.
3. He has no connection to past Canucks' failures."

Vancouver's leading Western Conference at the moment; this could finally be their year. I'm afraid PLU just might = Curse of Costello though, so perhaps not the best move.
Top
Post Reply
1604 posts

Users browsing this forum: No registered users and 49 guests